Physiology in Basketball is well known, because it is a sprinting sport.  For example; it is well known in the NBA and within the College ranks that a running team located at a higher altitude is difficult to keep up with for teams traveling from lower elevations.   Performance in Basketball is highly related to physiological conditioning.  It takes a quality team with one or more big players to off-set the running capability of a team located in a much higher elevation locale.

However, when it comes to shooting a basketball from "downtown" the high altitude teams have always been among the poorest percentage shooting teams, when transitioning for road trips to lower altitudes, in both the NBA and in the College ranks. That is especially true of the longer shots in the modern era of the three-point "barage." Actually, that is primarily true because there are very few high altitude teams, so most of their road trips take them to low altitudes.  The same is true for low altitude teams traveling to high elevations for road games, but it is hidden in the data, because of the relatively fewer teams at high altitudes, as well.

Biological Effects of Altitude on the Performance of Basketball Players 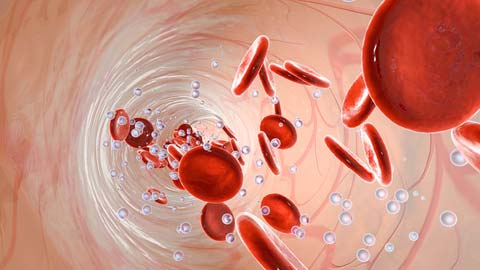 The basics of altitude physiology are as follows: When people, or even animals migrate from a lower altitude to a substantially higher one, it takes approximately 6 weeks for the body to fully acclimate. The acclimation process is three-fold. One is the oxygen level in the blood (cardiovascular system).  The second is the oxygen level in the brain (nervous system) and third is the pulmonary system (the lungs).

One of the first misunderstandings is that there is too little oxygen in the air, causing an acclimation to take place. This does not make scientific sense  and borders on what people commonly refer to as "an old wives' tale."  Why does it not make sense? Because, at 5,000 feet elevation, there are approximately 11 quintillion (11,000,000,000,000,000,000) molecules of air (including oxygen) in a space only slightly larger than a baseball.   So, there are approximately 33 quintillion molecules at full lung capacity in one lung alone. Since the human body absorbs (or uses) only 5% of the available oxygen into the blood stream with each breath, the balance being expelled during exhale, then the issue that causes acclimation to be necessary is not available oxygen, but most likely atmospheric pressure. 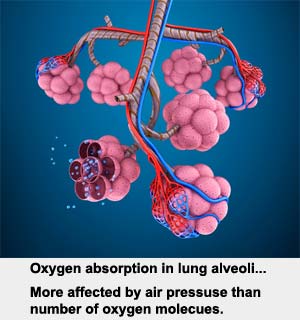 To further illustrate; at sea-level in comparison, there are approximately 13 quintillion molecules of air in the same volume (you do the math)  as in the example above and therefore 39 quintillion molecules in a lung approximately 3 times the size of a baseball.  When animals or humans migrate to a high altitude from a substantially lower altitude much closer to sea level, the first severe symptom is altitude sickness that occurs at about 8,000 feet elevation.  This is caused by brain swelling, due to the lack of atmospheric pressure to which the brain is normally conformed. Altitude Sickness causes brain swelling, dizziness, nausea, and with strenuous activity--pulmonary edema--and can be fatal.  See the article on altitude sickness:  https://www.uchealth.org/today/2017/12/15/altitude-sickness The only quick cure is to immediately expose oneself artificially in a pressure container, or naturally by descending into additional pressure conditions below 8,000 feet elevation.

Blood acclimation takes longer to occur, therefore basketball players who do not live at higher altitudes during the season, nor during the off-season, may not become fully acclimated to higher altitudes even if the home arena is located at say Denver, Colorado.  Studies are on-going regarding incremental altitude effects in lesser than 8,000 feet elevation, but to my knowledge no absolute scientific evidence of performance inhibitors are fully documented and accepted by the American Medical Association at this time.

The blood acclimates in the following ways:

Since there is not enough air pressure to press the available oxygen inside the lungs against the alveoli membrane to pass into the blood stream, then lesser oxygen initially enters the blood stream and therefore less oxygen gets to the brain.  The initial bodily response at a higher than normal elevation is for one to breathe harder with the lung muscles which presses the oxygen harder against the alveoli membranes.  The act of breathing harder most likely builds some additional strength in those muscles which surround the lungs and affect the process of breathing for those high-altitude residents. 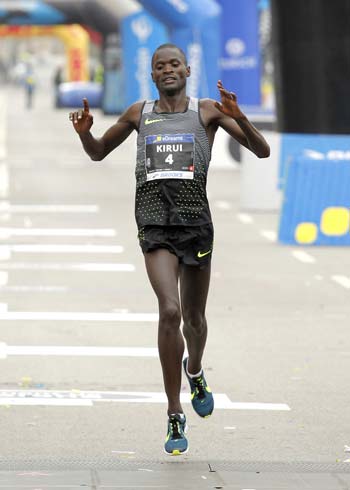 The second bodily response is for the bone marrow to produce additional red blood cells, and release them into the blood stream to help carry additional oxygen from that content which is available. The six weeks acclimation period is primarily for the creation of additional blood cells. Once additional blood cells are formed, then athletes become more competitive in the higher pressure low altitudes because there is more oxygen attaching to more blood cells making physical performance more relaxed than within their higher altitude venues.  This is the reason for the physiological theory of most productive athletic training known as "Live High; Train Low."    See article in New York Times https://www.nytimes.com/1998/10/27/science/live-high-train-low-and-move-faster.html The concept was originally based on the knowledge of Kenyan distance runners who live at approximately 8,000 feet elevation and dominate world class distance running at much lower elevations. It is also the basis for the invention of the Oxygen Depletion Tents in about 1998, in which an athlete would sleep in a tent with nitrogen being pumped into the tent forcing oxygen out (see our page labeled "Air Weight") thereby presuming the body would adjust naturally to oxygen depletion by producing additional red blood cells to compensate. I have not seen complete data on this concept, but if it has received less than stellar results, it is my opinion that it may be because the trigger to producing additional red blood cells is not the lack of oxygen, but the lack of air pressure. It is certainly much less expensive to build a nitrogen tent for purposes of a patent than to create barometric pressurization within a very strong enclosure, which may have had something to do with the Oxygen Depletion Tents' creation in the first place.

Does Physics (distance the basketball travels) Play a Larger Role in Basketball, or Does The Body Suffer More So From Altitudinal Issues?

In the case of basketball production, we know that the higher altitude teams struggle to compete for championships in basketball. We also know that statistics indicate high altitude teams perform better at home than at lower altitude locations. We know that lesser air resistance at the home arena would naturally allow the shooters to expand their shooting distance somewhat. Statistics produced by collegiate players, when aligned with the air densities in which the performance took place, show clearly that where teams travel to a venue substantially different than their home venue, say 2,000 feet elevation differential, then the three-point made percentage shows a 9% decrease from the percentage from road game three-point shooting in similar elevations. So the physics of ball travel, is consistent with air pressure. The physiological advice to best conditioning for stamina and performance is also consistent with the running reputation of high altitude teams. Is there a larger defficiency in shooting, or in running, when it comes to barometric pressure differences? 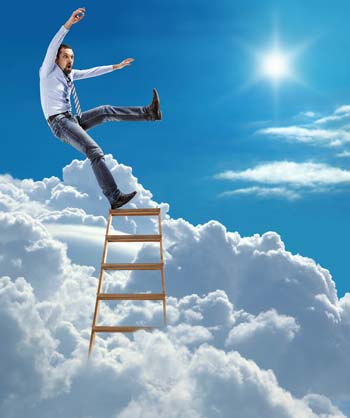 Since we are discussing physiology, then we must acknowledge that there are some individuals who react to high altitude exertion differently than those who do not have any known anemias. For example; football players who carry the sickle-cell anemia must not participate in football in Denver, Colorado as it may be life threatening. See article:https://www.foxsports.com/nfl/story/pittsburgh-steelers-ryan-clark-sickle-cell-trait-scare-an-anomaly-010512

High altitude teams tend to perform well in all the high altitude locations, suggesting that there is no deprivation in terms of physiological effects of regularly performing at high altitude. This would make sense, since the players would normally have had more than six weeks to acclimate physiologically.

There are many high-altitude college teams who play against other high altitude college teams and even more high school teams whose schedules compare similarly. There is no indication of any physiological interference with performance and there is no evidence of a scoring percentage issue in basketball three-point shooting from merely traveling to a similar elevation to compete. The typical home team advantage appears to be in play in all of the basketball divisions.

Interestingly, (at least to me) there is a great indication that these teams conform to their environment for basketball shooting and perform as any other team within its own environment, producing similar game numbers to low altitude teams.