Traditionally, earth scientists have used pounds per cubic foot (lb/ft3) as the measure of air density.  No doubt the traditional scientific scale works well for mathematical representations in scientific equations.  However, sport is played by more non-scientific people than not, and a 100 scale fits athletes better for the most part.

The "Neeley Scale" represents a cross-section of the total atmosphere; that which extends only from the mountain tops to sea level where sports using a projectile are typically played.  This cross-section is displayed on a 100 scale, which can then be divided into smaller increments of one or more decimals for extreme accuracy.   However, the larger benefit is derived from the whole number as one compares performance or expectations between one geographical location and another.

Since air density is very light at the top of tall mountains, especially when the temperatures are warmer, the scale begins at zero at this elevation.  The scale will approach 100 at sea level as the air density becomes heavier, if it is very cold in temperature on a particular event day.  The bulk of professional and non-professional sporting events will fit between 20.0 and 80.0 on the "Neeley Scale," so that rarely would an event approach the extremes of zero and 100.  One would probably be far below sea level and well into the Arctics' coldest air before the gauge would read above 100.  Similarly, one would probably need to be in the highest of mountain peaks, with the temperature approaching "hot," for the gauge to read near zero on the scale. 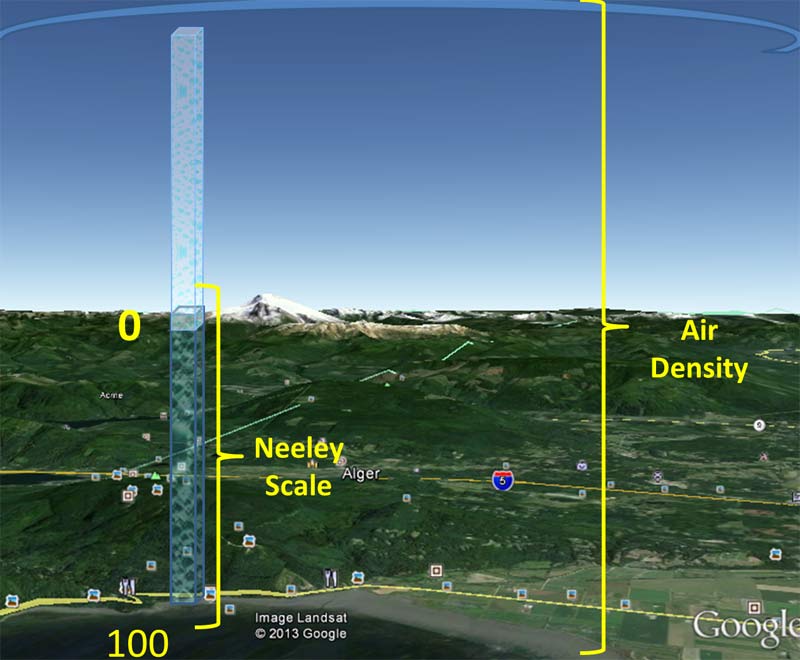 Actual Barometric Pressure at a given altitude is seldom (if ever) reported.

There is a good reason for this...weather systems can be and are identified by high pressure systems and low pressure systems moving around the earth.  However, at every altitude the "actual" barometric pressure is different, so it would be impossible to see the extremely small air pressure changes that occur hourly if there was no "standard."   Therefore scientists adopted sea level pressure as a standard and the smaller pressure changes have become meaningful regardless of the altitude.  However, the actual barometric pressure is far more substantial.  The actual barometric pressure when measured in inches of mercury, changes by approximately 1 inch per every 1,000 feet of elevation, so instead of 29.92 inches as at sea level, Denver, Colorado measures approximately 25.10 actual inches of mercury, but this is ignored by the weather monitoring and reporting services.  This is the biggest reason the public does not understand the impact of air density on sports.

The effect of humidity on air density is very slight and is actually opposite what it is commonly purported to be.  The common reputation of humidity is that it is heavy; however, this is a misnomer.  Humidity is actually light for a projectile to fly through, because there is more hydrogen in humid air than in dry air, which contains a larger percentage of nitrogen.  And, of course, nitrogen is heavier than hydrogen.  The "Neeley Scale" takes into account humidity, as well as temperature and elevation-related barometric pressure.

To use the "Neeley Scale" Air Density Calculator at the left; enter the zip code of the location you want to check the current air density index (ADI).  Then, click on the "Change Zip" button to calculate. The calculator will enter the elevation, the current sea level pressure, the temperature and current humidity level and re-calculate the air density index automatically using actual barometric pressure for the location and altitude.  Alternatively, you may check a future day or time for air density several days prior to a contest, by entering the venue elevation and the forecast pressure, temperature and humidity.     Click on the "Change Loc Data" button to calculate.  The automatic zip will disappear for manual entries and the Air Density Index will calculate using the actual barometric pressure at the elevation you entered.  For Basketball, remember the temperature is normally held near 72 degrees Fahrenheit inside the arena, so do not change the temperature to "outside" conditions.  We use 50% humidity as a standard inside an arena, because humidity does not change ball travel much and 50% is relatively close to most indoor conditions.