For Fantasy Managers and Bracket Lovers:

On the Men's and Women's College VMI pages, you will find current and past scheduled games and the VMI each team has accumulated through exposure to shorter and longer ball flight than the shooter's expectation. (Note: Non-members may view only previous games while members can view today's and tomorrow's games.)  As you know from research on this site, as well as from common knowledge, air resistance will keep a football from flying further. So Denver, CO (in thinner air) allows a field goal kick to travel further than in other stadiums. The same is true of long, three-point shot attempts in the flight of a basketball. 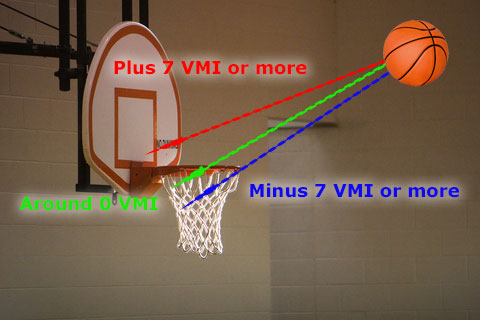 Our VMI for basketball shots is a gauge on the distance a basketball flies against today's air resistance at each game location. The VMI is created from the shooter's norm, which is based on his or her recent shooting in arenas he/she has recently played and practiced within. A Zero VMI means the team of outside shooters has been recently shooting in the same air density that surrounds today's basketball court. However, a VMI of minus seven or greater means that the team of three point shooters will need to use a greater thrust by about two inches or more of flight, in order to center the basketball in the hoop. This adjustment, if not done well, can mean that more rebounds may occur off the front of the rim than normal, giving the defensive team more rebound and scoring opportunities. Remember, these players and coaches do not account for air resistance differentials, except for occasional discussion.

A Plus VMI of seven or greater means that the team of three point shooters will need to adjust their feel to a lesser thrust by about two inches or more in order to center the basketball in the hoop. This adjustment, if not done well, can mean that more rebounds may occur off the back of the rim or the backboard than normal. A long bounce off the back rim, or a glancing-off of the backboard and rim-base, will give both teams additional rebound and scoring opportunities. Remember, the taller, stronger, more talented players will prevail in basketball, unless a team of three-point shooters can overcome them.

TBA - Games that are on the schedule, but teams have not qualified yet to be listed for such a tournament game will be listed as (To Be Announced) TBA.  When the team has been identified for "tomorrow's game time" then the team will be populated the morning of game day.

Score - "na" means no score has been recorded. The scores for yesterday's games will be populated the morning after the game. It appears that teams who do not advance in tournaments are periodically listed as having played a game, however, no score will be attached to those games that were previously scheduled, but not played.

Classics and MTE's - Many "Classics or MTE's" are not tournaments, but only single games with special TV coverage.  MTE stands for Multi-Team Event.  Some are played on campus sites and others in a neutral arena location.